Skopje is quickly becoming a must see destinations in the heart of the Balkans!

For the last several years the city centre has seen a major transformation and now one can spend an entire day and still not manage to see everything. From the Triumphal Gate (pictured) to the giant statue of Alexander the Great, the numerous museums surrounding the area and the old stone bridge, the cultural offering is simply immense. The area is buzzing with nightlife as well, with many of the city's most attractive bars, coffee shops and restaurants beeing located on the Makedonija street. Shopoholics will have their hands full as well as there are plenty of shops to choose from with two of the biggest shopping malls within a 5 minute walk. 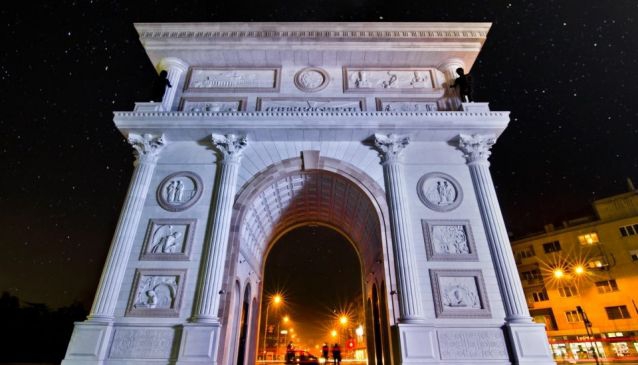 Vodno is the perfect getaway at just 10 minutes drive from the city centre. It's the nearest adventrue destination and has to offer a bit for everyone. Whether you are an experienced climber or just fancy a relaxing walk the mountain has trails to fit every fitness level. Adrenaline seekers are welcome as there are a number of downhill biking trails and paragliding's also quite popular. For the rest that would like to soak up the amazing view and just enjoy the fresh air there are several caffeterias and a gondola that will take you to the top where you will see the iconic landmark of the Millenium Cross. 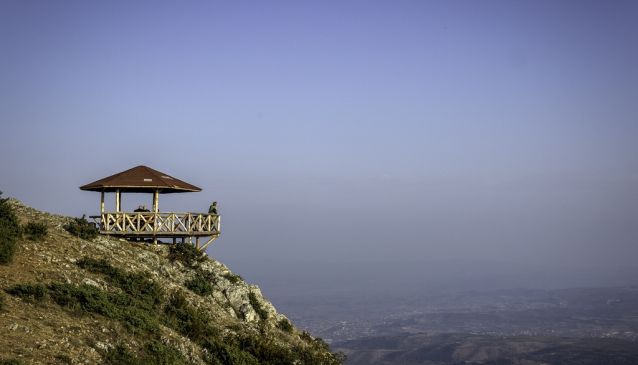 The old bazaar has been a centre for trade and merchants as early as the 12th century and nowadays it represents an iconic heritage site for the city. It is a vivid representation of the country's past and its inheritance from the Ottoman empire. Still having authentic shops for jewelry and handcrafted products it can be a paradise for collectors of original arts and products . Its coffee and tea shops perfectly fit in the timeless surroundings and offer an original experience for every traveler. Besides the roaming the main street one can visit the numerous sites around the old bazaar such as the covered market bezisten, the old clock tower, cifte hamam and several mosques from ottoman time. The old bazaar is also within a walking distance from the City Centre and Kale Fortress. 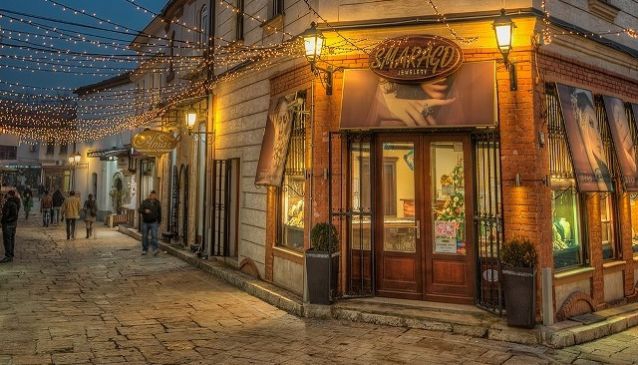 The old fortress of the city, or as it is known Kale Fortress was built by the Byzantines in the 6th century, and still remains the dominant structure in the city. It was partially destroyed in the 1963 earthquake but was quickly restored and conserved. It is one of the most destinguishable sites of the city along with the stone bridge and the newer statues on the Macedonia Square. The fortress is within a walking distance of the city centre, but it's not always open to visitors so ask around prior visiting. The view of the city from the fortress is astonishing, so if given the chance do not hesitate to visit. 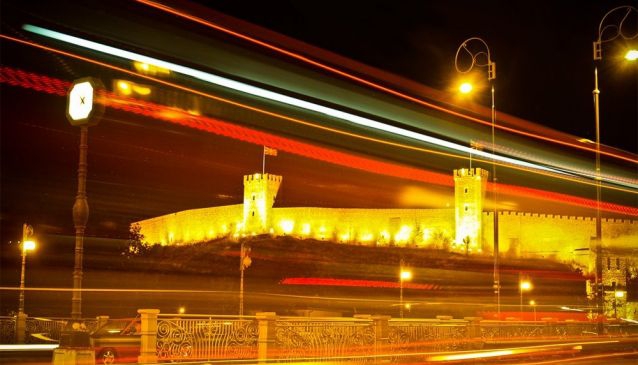 Located in the City Centre this landmark was built to cherish and glorify the life work, generosity, perseverance and dedication of one of the greatest, Mother Teresa. Being born in Skopje in 1910 Mother Teresa spent her early years in the City Centre and the memorial house is  situated where once stood the Sacred Heart of Jesus Roman Catholic church where Mother Teresa was baptized. The memorial house is a modern representation of the house where Mother Teresa grew up, filled with relics of her time of which the most astonishing are her birth certificate issued in 1928, her sari, hand written prayer book, the rosary and cross as well as several awards Mother Teresa won throughout her life. 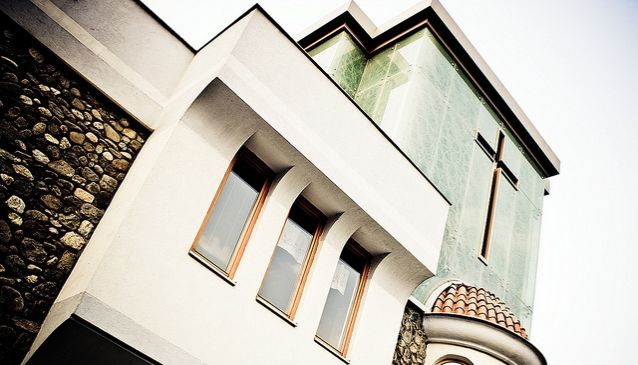 Mustafa Pasha Mosque is located just above the Old Bazaar and is one of many relics remaining from Ottoman times.  Built in 1492 by the sultan's vizier in the region it represents one of the most beautiful ottoman remains in the country. It has a great view over the Old Bazaar and has its own garden. It was recently restored but its beauty and simplicity in the construction remain the same from the 15th century. 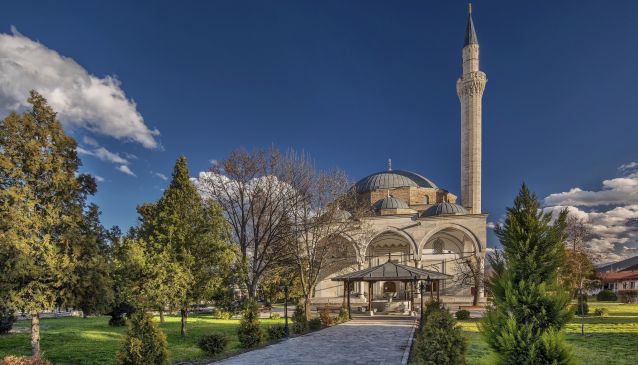 Matka Canyon is only a 30 minute drive from the city and represents one of the favourite week-end destinations for Skopje citizens. Although it's a manmade lake in a canyon formed by the river Treska, the surroundings are astonishing and full of natural beauty. As the river carved the canyon many caves were created and most famous one is Vrelo Cave which can be reached by a boat ride across the river. There are perfect trails for hiking, putting Matka on the to-do list of the more active visitors and there is also a restaurant  overlooking lake for the more laid back ones. The area is also a home of several monasteries each one with its own astonishing history. 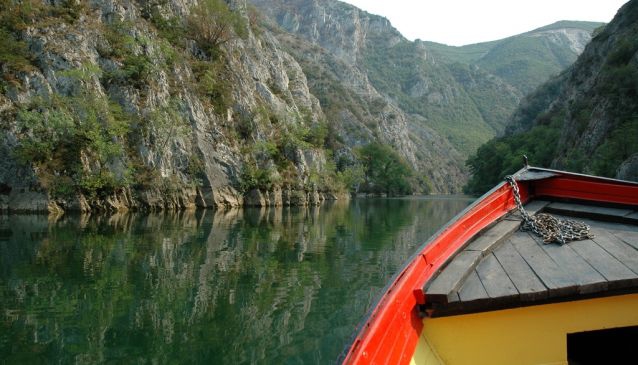 The Skopje Aqueduct lies just 3 km from the city centre near the village Vizbegovo and it was used as the primary method for water supply from the 18th century. Its origins are not yet clear but it's believed to be constructed during the reign of the Byzantine emperor Justinian I, and nowadays only 386 meters with 55 arches remain. The exact coordinates of the Aqueduct are: 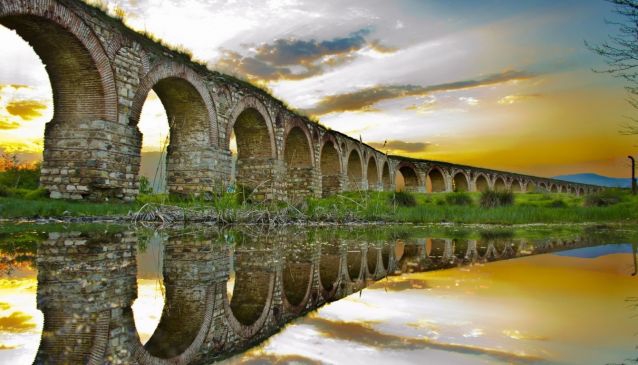 The Church of the Holly Saviour is built during the late 17th or late 18th century on the remains of a previous church that was burned during a fire. At this period Macedonia was still under Ottoman rule, and the church had to be constructed with a large part of it underground as the Ottomans did not allow Christian churches to have a dominant exterior look. However when entering inside, the masterpiece and brilliance of the interior carvings and iconostasis compliments the luxurious interior which also features a preserved fresco from the previous church believed to be from the 16th century. The church is also an eternal home to one of the great Macedonians, Goce Delchev lies buried in the yard of the church with a monument dedicated to him. 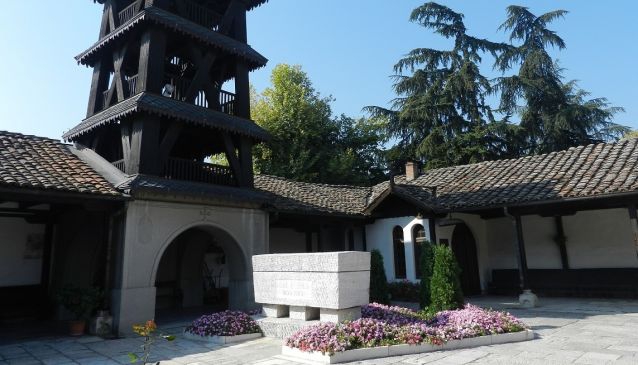