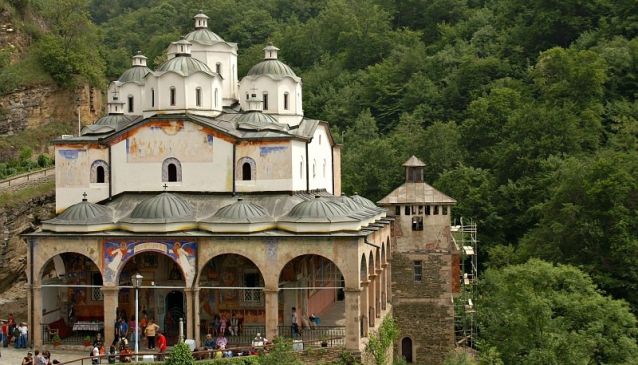 The splendid Monastery of St. Joakim Osogovski is open for all believers and travelers who are looking for peace and pleasant environment away of the city crowd and traffic.
The monastery is located only 2 kilometres away of Kriva Palanka in a splendid mountainous area where tranquility prevails. It was built in the 12th century, during the reign of the once powerful Byzantine Empire. The people who lived in Kriva Palanka helped in the construction of this sacred place on which the citizens are very proud. It is a three-nave church with porches and 12 cupolas, which represent the 12 Apostles. Before entering the Monastery you will be amazed by the beautiful nature which surrounds it. You will see two churches , Holy Mother of God which is the older one and the new one St. Joakim  Osogovski. Both situated in a tranquil and green area fulfilled with tall trees and various plants. Entering the church you will notice the tall walls painted in vivid colours as well as many beautiful icons and frescoes which originate from different periods. The iconostasis will impress you as each of the icons is a real masterpiece of art.
The Monastery is one of the most visited in the country not only because it is situated in a tranquil area which provides relaxation for all visitors but also because every year on the 28th of August the church celebrates the Assumption of Mary.