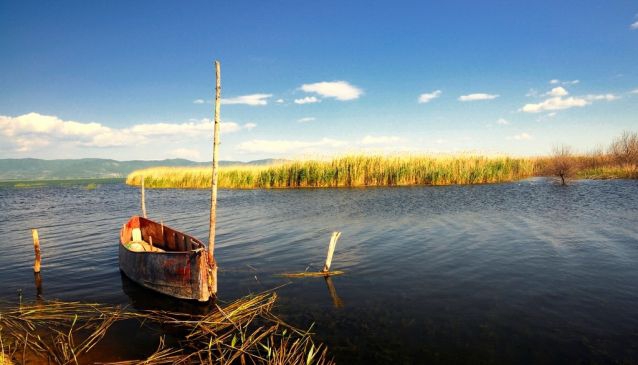 Located in the south-eastern corner of the country this small but charming lake has seen peace, war, fires and prosperity throughout the years. The lake lies on the border between Macedonia and Greece and is home of the two tourist destinations Star and Nov Dojran.

Although there is the belief that small lakes usually are deep, Dojran Lake is quite shallow and its deepest point is only 10 meters. Dojran Lake is a popular lake because of the many unique folklore stories about it.

First and foremost the heart-breaking story about its name. The legend goes that the Ottoman general that commanded the troops settled in Dojran set his eyes on a beautiful, Christian, Macedonian girl named Dojrana, but she was already in love with a man named Labin. One Sunday at the traditional gathering near the lake, Dojrana was dancing with Labin when suddenly the Ottoman general appeared. Angry at the sight of the two dancing, the general wounded Labin, wanting to get him away from the general Dojrana dragged Labin to the edge of the lake. Trapped from all sides by the general and his guards and unwilling to surrender, the two swam into the lake never to return. In their honour, the lake and city were named Dojran.

Dojran also has a unique and traditional way of fishing specific only to its waters. Besides being a home to the various fish below the surface Dojran is also a home to the Kormoran bird above the surface. These birds feed primarily on fish and the local fisherman adapted a technique that uses the Kormorans as a 'herders' that guide the fish into the baits made from straw and net.

Dojran Lake was close to an ecological disaster but the swift efforts of the local government and the creation of a new hydro system in 2002, brought Dojran Lake back to life and with that the tourists, and the old shine of this small and charming Macedonian holiday destination.