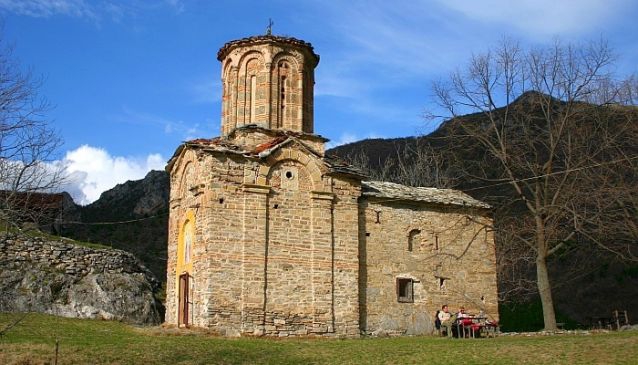 Located near the village of Shishevo, on the cliffs rising above Lake Matka, the church of St. Nikola is a splendid medieval building which will impress you with its architecture and beautiful interior.
It is not familiar when the church was built but according to some researches it is believed that it was built or reconstructed in 1345. The church of St. Nikola consists of two buildings, one of them is a small church which covers the eastern part and the western part is in a form of a narrow cruciform with a dome consoles. These two parts are very different when it comes to their structure and way of building. The eastern part is made only of stone while the western part is built using both stones and bricks. The church also prides itself on three beautiful layers of frescoes which originate from different periods. The oldest frescoes which originate from the construction of the church are situated on the north and south walls, the eastern area of the church is covered with frescoes which originate from the 14th century, also there are frescoes which originate from 1630. Besides frescoes the walls are decorated with beautiful and colourful paintings.
In order to reach the church you must walk as there is no possibility for driving cars in this area. The path passes across picturesque and splendid setting which gives you an opportunity to enjoy fresh air and breath-taking views. The perfect location of the church of St. Nikola allows you to capture magnificent views of Canyon Matka and the beautiful monastery of St Andrew.