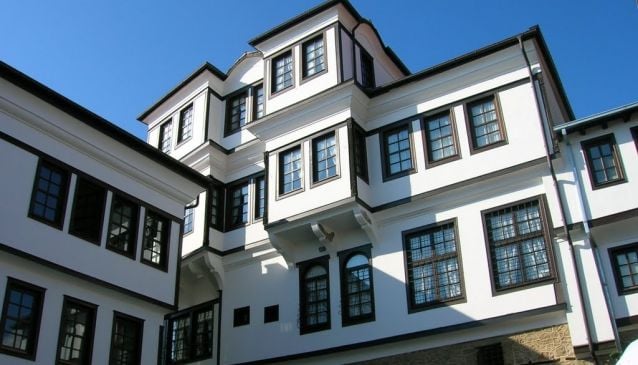 There are many beautiful places and splendid buildings in Ohrid that must be seen, one of them is the House of Robevci which today represents a valuable National Museum.
This house is popular because of the splendid architectural style it possesses, it is considered as a masterpiece of the old architecture in Ohrid. The house was built in the 19th century, if you pay closer attention you will see that it was built for a rich family and that is actually true. In this house once lived the rich and merchant family Robevi which was popular in Ohrid. They lived here for 35 years and left the house in 1861 after it was burnt to the ground. Later, in 1863 the house was rebuilt and divided into two parts, the house was left again in 1900. In 1990 it was reconstructed and today it is a cultural-historic museum of Macedonia which consists of three floors where many archaeological treasures are preserved, also many items that belonged to the Robevi family can be seen on the second floor of the building.
National Museum Robevci House attracts the attention of numerous travelers from Macedonia and all over the world.