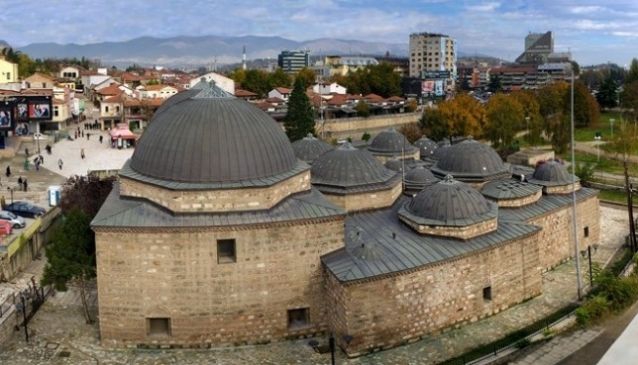 Daut Pasha Hammam a former hammam (public bath) is located in the entrance of the Old Bazaar in Skopje. This monumental statue of Islamic Profane architecture was built in 1484 by the famous Turkish general Daut Pasha. From the outside, except for the arc and architrave rectangular boxes for the windows and the doors, the flat wall surfaces are dominated by alternately stacking stone and two rows of bricks joined by mortar which was typical for the architecture of that period. Inside, Daut Pasha Hammam has 15 different sized rooms (baths) that are interconnected with vaulted passages, decorated with typical oriental ornaments. Most striking part of this building is the roof, composed of 13 unequally spaced domes. Today Daut Pasha Hammam is used as an art gallery, collecting modern art, paintings and some ensembles of wall paintings and icons occupy the highest positions in European and world history of art.