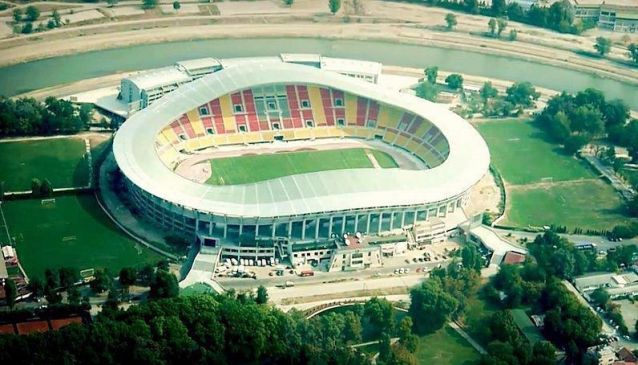 The National Arena 'Phillip II of Macedonia' is a multi-purpose stadium which is named after the ancient king Philip II. This complex attracts the attention of numerous visitors because of its sophisticated architectural style as well as the many events that occur here during the whole year.
The stadium is used mostly for playing football matches but also many music concerts and spectacular events are performed here. The Arena has a capacity for 36,400 people and it is the home stadium of FK Vardar and FK Rabotnicki from Skopje, both of which compete in the Macedonian First League, as well as the home ground of the Macedonia national football team on almost all occasions.
The National Arena 'Phillip II of Macedonia' is located in Karposh, next to the City Park and it is a place designed for entertainment and enjoyment for people of all generations. Because of its perfect location it is easily accessible and the numer of visitors constantly grows.