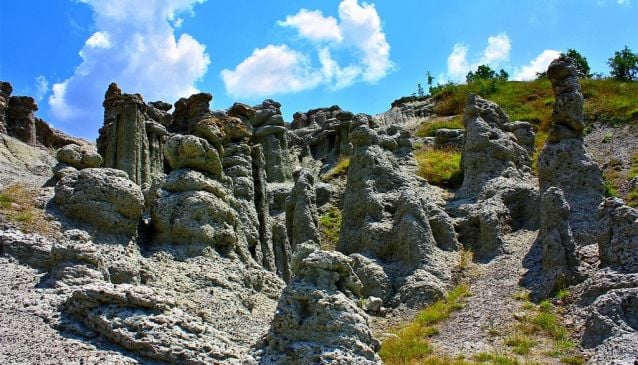 Kuklici (Stone Dolls) is located 8km northwest from Kratovo. It is known as a natural phenomena of characteristic erosive pillars, and due to the interesting appearance of these pillars that resemble of human figures arranged as a 'petrified wedding guest', the local population believes in the legend of the 'happy wedding'.

The most famous legend about the formation of the stone pillars is the one of a man who couldn't decide which of his two girls to marry. So, he planned to marry both of them on the same day, but when the bride-to-be listened that there's another wedding in the same village, went to see who's getting married the same day as she is. When the desperate bride saw her future husband marrying another woman she cursed him, his future wife and all the guests who attended the wedding and they were immediately turned into stones. Each of the stone columns is given a name and place in the wedding so you can see the bride, groom, the best man and all the other guests.

There're 148 dolls in the locality. However this 'wedding' represents a rare occurrence in the world and it's worth the trip.