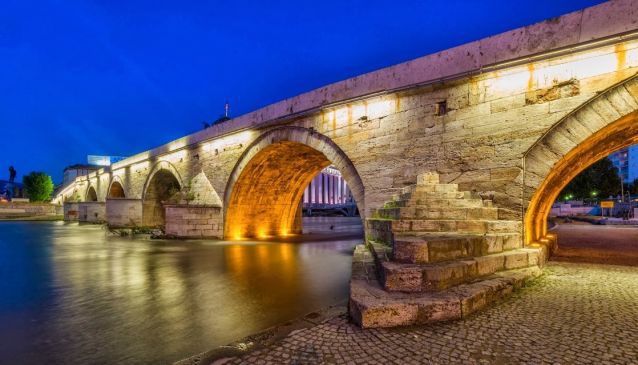 Directions to Kamen Most (Stone Bridge)

Stone Bridge in Skopje is one of the greatest monuments of this kind. It is a bridge across the river Vardar, which today connects the old and the new part of the city of Skopje. The bridge was built in the second half of fifteenth century and form well-formed stone blocks, while its massive construction relies on firm pillars interconnected with 12 semicircular arches.

Crossing over the bridge, you do not just cross over to the other bank of the river Vardar. This bridge also unites the cultures rooted and blooming in a single place, in the same city of Skopje, thus the bridge represents a corridor of civilization too. Nowadays, same as six centuries ago, people use the bridge to cross from the new city centre filled with coffee places to the old bazaar.

Stone Bridge is located in the central area of the city and is one of the main tourist attractions, it has been a symbol of Skopje for centuries.