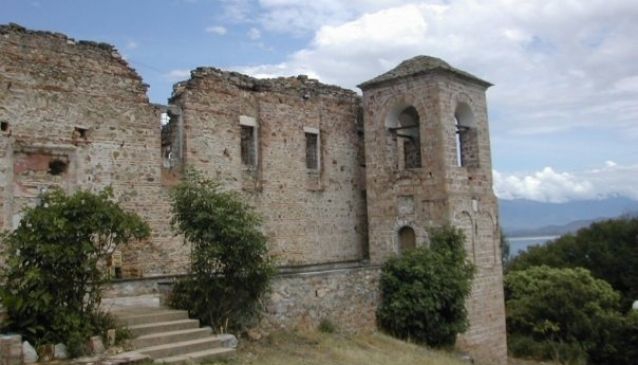 As you enter the city from road leading south you will see an imposing old structure perfectly tucked into the hill overlooking the lake.

The church of St. Ilija is arguably the most recognizable monument and landmark in Dojran.

It epitomizes the towns turbulent past and struggle for religious and cultural rights against the occupiers.

The church was built in 1848 after a long struggle for a religious outlet of the locals, and became a dominant building in the town because of its size, height 20 meters and length 30 meters, and location, on a hill at the northern entrance of the town.

In the beginning the Ottomans only allowed religious services in Greek language as an attempt to discourage the locals going to church, but that initiative failed swiftly and services began in Macedonian. A triumph of the locals will, endurance and faith.

The most difficult times lay ahead as war came upon the city. Right in the middle of the Macedonian Front, the town was beseiged by Bulgarian troops.

St. Ilija church was destroyed along with most of the town in 1916. There are still parts from the original structure standing, as witnesses of the heartbreaking past of the region.

From the charred remains the historians realized that the church was filled with colourful frescoes and mosaics that were made by local artists.

As part of the revival of the town, the local government has started a large project for its complete restoration and we hope to see it once more as the focal point of Dojran's cultural and historical heritage.

The church of St. Ilija is a must visit spot in Dojran, best way to experience the past and gaze upon the future.