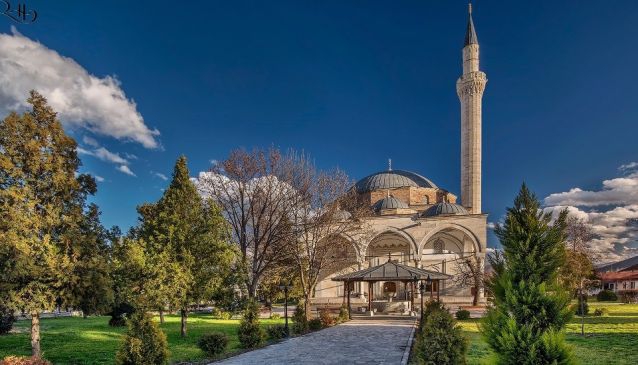 Mustapha Pasha Mosque is among the most beautiful monuments of the Islamic religious architecture found not only in Skopje, Macedonia but also the Balkans as well. Its architectural value becomes even greater also because of its extraordinary location. Located on a hillside opposite Kale, this mosque dominates the entire space around it.  Mustapha Pasha Mosque was built during the last decade of the 15-th century (1492) by Mustapha Pasha during the Ottoman occupation of Macedonia. At the entrance gate you'll find the inscription which speaks of the time when the mosque was built. The Turbe of Mustapha Pasha Mosque is situated on its southeastern side. In its internal side there's a sarcophagus of his daughter which is decorated with floral motives.

Mustapha Pasha Mosque is part of the Old Bazaar area in Skopje that features many art galleries, historical and cultural landmarks, Christian churches, and many old craftsman shops. This area is best for experiencing the mix of cultures and religions that shaped the history and future of the country.