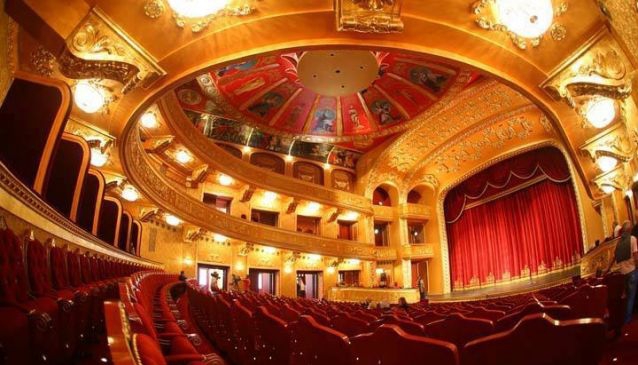 The new theater building is situated on the left bank of the river Vardar and has been constructed on the foundation of the old theater which was destroyed in 1963 Skopje earthquake. The building, covering 7,200 sq m. is designed in many ways to resemble the one that crumbled away in this earthquake. The large auditorium, include parterre (ground level and two galleries-balconies) with a capacity of 724 seats and the small one with around 213. It's also equipped with an up-to-date scene technology, which is a must for such institutions. The theater is luxuriously decorated, with glided ornaments inside and outside and statues on the roof. The new building which meets the highest standards for construction of such institutions, offers possibility for nourishing the art, culture and realizing high-quality performances.

Macedonian National Theatre is the oldest and largest theatre in Republic of Macedonia founded in 1945. Since its founding, the theatre team has staged nearly 300 premieres and the theatre troupe has given over 8,000 performances. It is aiming to establish and profile its own repertoire as well as aesthetic concepts by which it shall distinguish itself from the other theatres in Macedonia and at the same time promote itself as a national theatre institution.